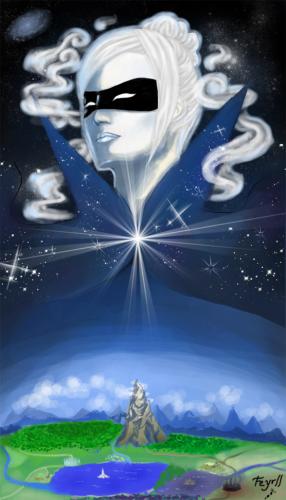 Estarra, the Eternal, is beyond even the Elder Gods, for she represents a culmination of the primal forces that created the multiverse of Lusternia and rules over all divinities. With the exception of the Soulless, all gods and goddesses must answer to her and her alone, though she does not interfere (or, it must be said, truly care) about their positioning, schemes and politics.

Estarra first came to be by the blending of the Daughters of Yudhe, Dynara and Magnora, and the essence of the Nameless Son of Yudhe, during the time known as Cosmogenesis. Though note that Estarra herself was not around at the time, but the process had first begun by them ventured forth through a tear in reality and later blending in another reality. She later was freed from this reality through the efforts of Roark, and came back to Lusternia after the Taint had been released.

With Estarra's coming, so began the first day of the new Age (Coming of Estarra "CE"). With her she brought forth the Human race, which she stated were what remained of the essence of Yudhe. As Estarra studied the world of Lusternia and what it had become, she realized that the living seals that held the Soulless will eventually expire and must be renewed.

Estarra could not destroy the Soulless, for their beings had become part of Lusternia and destroying them would also destroy the world. She also could not renew the seals herself, as they were made from the essence of the mortal races and could only be renewed by them. As it has been seen whenever the gods try to interfere to push back a soulless, the nine seals begin to buckle and weaken, as such it is up to the mortal races to keep them at bay.

Estarra then gathered the living seals for safekeeping and every generation will release them for the ultimate ritual to take place whereby the greatest of mortals would wield the seals and renew them. The mortal that does such becomes an Ascendant of one of the Nine Domoths (In the past, mortals were able to ascend to the ranks of one of the Gods by renewing the nine seals, but the events that brought about the Threshold Abyss changed that). Thus the Age of Ascension has begun with the Coming of Estarra.