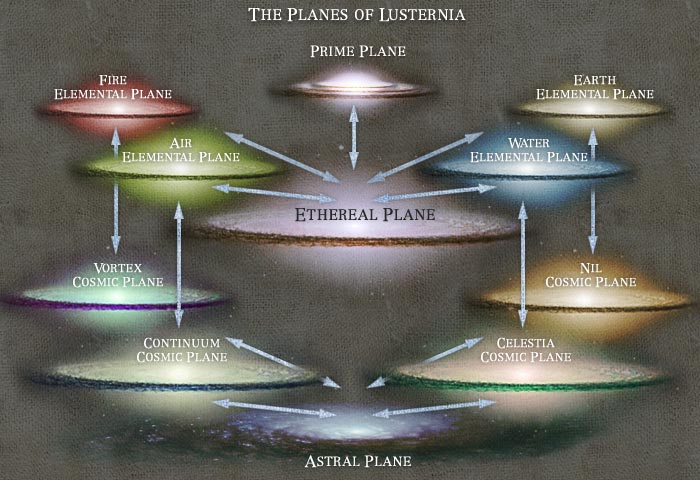 Most of the adventures in the world of Lusternia will take place in the Basin of Life, an enormous continent surrounded by a circle of mountains. This part of the planescape is known as the Prime Material Plane. In the center of the Basin are two inland seas, and surrounding that are great highways that are the arteries of the world's commerce and trade. Presiding over all is the towering mountain known as Avechna's Peak, situated to the northeast among the northern mountain range, a holy site where many pilgrims travel. The Prime Material Plane is adjacent to the Ethereal Plane.

The Cosmic Planes are sometimes called the "higher planes". Each Cosmic Plane has a unique vibration which calls to certain mortals, such vibrations embodying a philosophy or a way of thinking. The greater Divine beings who live on these planes often help those who choose to be guardians of their plane. Though mortals do not fully understand what these beings are, it is interesting to note that the Elder Gods refer to them (sometimes affectionately and sometimes contemptuously) as the "half-formed". The layer of Cosmic Planes lie between the Elemental Planes and the Astral Plane.

The Astral Plane was discovered by Emperor Ladantine VII, last ruler of the Holy Celestine Empire. This Plane imprisons the greatest of the Soulless Gods, Almighty Kethuru, and is twisted by his presence. The Plane itself is a series of floating spheres, each a monstrous horror unto itself, which slowly move in strange orbits, continuously bumping into each other. With Kethuru now firmly imprisoned, it is possible to travel to these astrospheres and safely drain the latent energies there, though this process is not without its hazards.