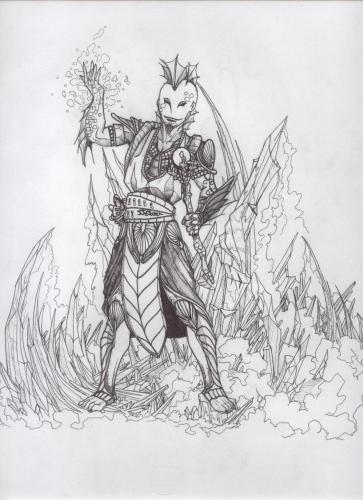 Your affinity to water is so great that you can survive within it no matter what the circumstances, even if it is stilled. Additionally, you will be able to sleep in watery environments.

This also will allow you to DIVE and RISE to the deep ocean levels as well as avoiding strong ocean currents.

Summon forth cold storm of hail that will batter your enemies with damage and frostbite. You may target a single enemy or target all enemies between connecting nodes and the node you are standing on.

You may temporarily flood almost any environment, turning it into a watery location. If a location is currently the demesne of any druid or mage, you can FORCE it and break the node in that location. It will take some time to break a node and will require your full concentration.

The primary power of aquamancy is to build your own water demesne. By creating a MELD, you create a node of power. You can have up to 3 nodes at any time, and they cannot be placed next to each other. If you place nodes within 5 rooms of each other, leylines will add the connecting rooms to your demesne.
You may also BOND to a fellow aquamancers nodes and assist them. Bonding increases the strength of the nodes and the elementals that defend them.
While in your demesne, you can SENSE who dare stand in your waters and WATCH who enters and leaves. DEMESNE will show you what rooms are included in your demesne, and what powers are currently active. You can DISSOLVE your demesne at any time or CLEAR a specific node to remove it.

Create a rush of currents that pull your enemies out of your location; or if you are located at one of your nodes, away from any node in the demesne.

A deluge of water will pass through your demesne, damaging and knocking over your enemies. If they are already knocked over, they'll be knocked off balance.
Append DAMPENto lower this effect.

Whirlpools will have a chance of pulling your enemies back into the room if they attempt to leave and afflicting them with frostbite.
You can append DAMPEN to lower this effect.

You can dissolve the aura of protection defense around those who are using it to escape some of the powers of your demesne. This requires balance but not equilibrium and is a very fast attack. You can also dissolve it from all enemies between connecting nodes, or all enemies inside your entire meld for a power cost.

Summon forth blocks of ice to cause random mental afflictions and give frostbite to your enemies.
You can append DAMPEN to lower this effect.

You can raise a dense fog that will obfuscate locations and afflict your enemies with frostbite.
You can append DAMPEN to lower this effect.

Jellyfish will float throughout, stunning your enemies and building frostbite.
You can append DAMPEN to lower this effect.

Call a golden dragon turtle to gift you with a golden egg. The power cost will be significantly less if cast on the Elemental Plane of Water. Once every two years, you will be able to summon forth a new egg and transfer ownership of your dragon turtle.
The dragon turtle has two unique inherent abilities:

The dragon turtle can walk over water or sprint in a line if directed to.

This is a unique breath attack: it does more damage than a standard breath attack and will afflict with frostbite.

A summoned typhoon will smash any enemies to the ground who dare to fly in your realm. It will also block use of natural forest if cast. Furthermore, any who attempt to fly may find themselves caught in a net of air. It will also afflict enemies with frostbite.
You can append DAMPEN to lower this effect.

Your allies will benefit more from sipping vitals while your enemies will find them sipping for less.
You can append DAMPEN to lower this effect.

Bubbles will drain the ego of your enemies depending on the level of frostbite they have.
You can append DAMPEN to lower this effect.

You may summon a missile of ice to attack anyone within your demesne. It will damage and build frostbite on them.

Summon forth a healing spring, which will heal you and your allies and afflict enemies with frostbite.
You can append DAMPEN to lower this effect.

The ultimate weapon of the aquamancer is a staff created from the pure waters. By wielding the staff you may POINT STAFF at a target and shoot a blast of icy water at your target. With WHIRL STAFF, you can reveal anyone hiding in your location. The power cost will be significantly less if cast on the Elemental Plane of Water.

You may TUNE STAFF to choose what percentage of your damage is in the form of blunt, asphyxiation or cold damage. You may also TUNE STAFF CLEAR to return your staff to its original balance.

Summon forth a stinging rain, which will occasionally strip your enemies of waterwalking and waterbreathing or other defences.

By releasing a maelstrom, you demonstrate the most intense and potent powers of the Elemental Plane of Water. An enormous storm will roll throughout your demesne, intent on destroying your personal enemies. You must wield your staff and be at full mana to invoke such a spectacle. The damage dealt by the Maelstrom will depend on how much frostbite your enemies have, though it will entirely dissipate all their frostbite when it hits.
Bonded melders will reduce how long this takes to cast.