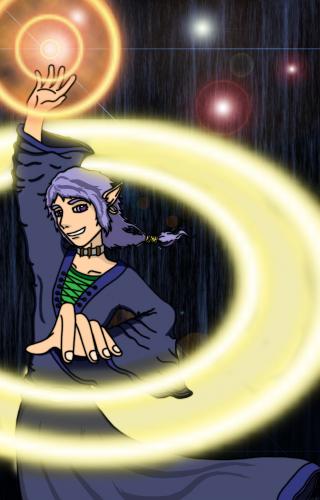 This is the simple calculation of a person's nativity (where the planets were on his or her date of birth). As all you need is the date of birth, the person need not be present to calculate the natal chart. However, if the person is physically before you, you may also determine what astrological energies are around him or her (if any).

The Sun is the center of the astrological system, representing the ego and the self. The Sun's effect when cast as an offensive ray of energy is always to cause damage. The type of damage depends on which sign it was in when the target was born (check his or her nativity). (Note: The damage source is always 100% magical.)

Though not a planet, the Moon is considered a celestial body as far as astrology is concerned. It moves extremely fast, transversing the entire zodiac belt in approximately 30 days. The Moon represents emotions and fluctuations. The Moon's effects depend upon which sign it was in when the target was born (check his or her nativity).

Each nation is under a particular sign. When the Sun transits this sign, astrologers connected to the nation's nexus will find an increase in ego.

Eroee is a fast moving planet, taking about three months to transverse the zodiac belt. Eroee represents love and attraction. Eroee can go retrograde (i.e., appear to move backwards in its orbit). Eroee's effects depend upon which sign it was in when the target was born (check his or her nativity).

Sidiak is a moderately fast moving planet, taking about four months to transverse the zodiac belt. Sidiak represents thought and the ability to think. Sidiak can go retrograde (i.e., appear to move backwards in its orbit). Sidiak's effects depend upon which sign it was in when the target was born (check his or her nativity).

Tarox transverses the zodiac belt in about half a year. It represents the forces of war, aggression and impulsiveness. Tarox can go retrograde (i.e., appear to move backwards in its orbit). Tarox's effects depend upon which sign it was in when the target was born (check his or her nativity).

Papaxi is a slow moving planet, taking almost a year to transverse the zodiac belt. It is often thought of as a benefic force, as its energies represent luck and expansion. Papaxi can go retrograde (i.e., appear to move backwards in its orbit). Papaxi's effects depend upon which sign it was in when the target was born (check his or her nativity).

Note that Papaxi reduces the maximum of either ego, health or mana of the target, but this does not stack nor is it long lasting.

Aapek is the slowest moving planet, taking over a year to transverse the zodiac belt. It is often thought of as a malefic force, as its energies represent restrictions and boundaries. Aapek can go retrograde (i.e., appear to move backwards in its orbit). Aapek's effects depend upon which sign it was in when the target was born (check his or her nativity).

Determine the location of another person by gazing at the patterns in the stars.

Each nation is under a particular sign. When the Sun transits its opposite sign, astrologers connected to the nation's nexus will find their health increase (1/4) to protect them.

The first sign of the zodiac is that of the Volcano, representing the first initiative of eruption and is the force of drive and power. The Sphere of the Volcano impacts susceptibility or resistance to forced movement.

NOTES ON ASTROCASTING RAYS OF THE ZODIAC: Unlike tapping directly into the planetary power of a specific celestial body, the practiced astrologer can instead invoke the the zodiac sign itself. Any planets within that sign could strike the intended target. If there is more than one planet within the sign, it will be random which planet's energy will strike. If no planets are within that sign, then there is no effect. Retrograde planets will always strike if within that sign, no matter how many there are. The effects of the planet are NOT determined by the nativity of the target; rather, it is determined by the sign. In other words, if the Moon is in Volcano, the Volcano ray will always cause the target to hallucinate regardless of his or her nativity (if the Moon energies strike).

NOTES ON ASTROCASTING SPHERES OF THE ZODIAC: Astrological spheres of energy can be placed around individuals (including the self). However, the effects and cost of casting are entirely dependent upon the current planetary configurations. To calculate the effects, the astrologer must know what aspects the planets are to the sign of the sphere being astrocast. Aspects determine whether the effect is either positive or negative:

As an example, if an astrologer was casting the Sphere of the Volcano and the Sun was conjunct Volcano (i.e., 0 degrees or within the same sign), the effects would be positive (i.e., the person under the sphere would have a huge positive resistance to fire). If the Sun were the Burning Censer (the opposite sign of Volcano), then the effect would be a big negative (i.e., the person would have a major negative susceptibility to fire). Likewise, the duration of the spell would be determined by the aspect of the Moon to the sign of the Volcano. The casting cost in terms of mana, health and power would likewise fluctuate depending on the current planetary aspects to the sign of the Volcano. Papaxi is a wildcard, and if it is negatively aspected to Volcano, it could suddenly change one of the other aspects of the spell negatively.

IMPORTANT: Astrocasting a sphere while the target has the opposite sphere will destroy both spheres (thus, it is not possible for any individual to ever have more than 6 spheres upon him or her).

The second sign of the zodiac is that of the Antlers, representing the body and inner feelings. The Sphere of the Antlers impacts balance recovery time, either for good or for ill.

This spell is only available to astrologers who also possess the skill of AstroGate in Planar. Further, it will only work for those who are connected to a nexus of power. The astrologer may travel along the astral winds to an energy node whose vibrations are sympathetic to the nexus of power to which the astrologer is in tune.

The fourth sign of the zodiac is that of the Dolphin, representing high emotions and inner majesty. The Sphere of the Dolphin impacts equilibrium recovery, either for good or ill.

The fifth sign of the zodiac is that of the Lion, representing ego and leadership. The Sphere of the Lion impacts maximum ego, either for good or ill.

By blocking one of the seven planets from your astrological senses, you can prevent it from being used in any zodiac sign rays you may cast.

The eighth sign of the zodiac is that of the Spider, representing the forces of death and transformation. The Sphere of the Spider impacts ones ability to WRITHE out of bindings.

Each nation is under a particular sign. When the Sun transits its imum coeli, astrologers connected to the nation's nexus will have any damage done to them to be reduced.

The ninth sign of the zodiac is that of the Dragon, representing philosophy and meditation. The Sphere of the Dragon impacts your mental capacity.

Those who study the stars are acutely aware that the celestial bodies in the heavens are many, and that the planets are but the largest. While the stars answer the call of none, it is possible - though difficult - to summon down a meteor from the heavens.

In order to do this, one must first draw a zodiac circle in either salt or blood upon the ground in a place with a clear view of the heavens. Though any who study Astrology may draw such a circle, only those with mastery of the meteor know its grim purpose. Once done, you may call the fury of the stars upon any transgressor who is affected by a negative zodiac sphere. The full force of the meteor will depend upon how many negative zodiac spheres by which the transgressor is affected. The summoning will consume all of the negative zodiac spheres in the process. A deadly meteor, if empowered by the zodiac energies of six negative spheres, will spell almost certain doom.

Additionally, a lesser amount of damage may be done to your personal enemies who stand too close to the focal point of the summoning.

The tenth sign of the zodiac is that of the Skull, representing ambition and power. The Sphere of the Skull impacts maximum health, for either good or ill.

The eleventh sign of the zodiac is that of the Bumblebee, representing aspects of society and friendship. The Sphere of the Bumblebee impacts movement celerity, for good or ill.

The twelfth sign of the zodiac is that of the Glacier, representing the unknowable mysteries encased deep within its icy surface. The Sphere of the Glacier impacts susceptibility to cold, electric, and physical damage.

Each nation is under a particular sign. When the Sun transits its medium coeli, astrologers connected to the nation's nexus will will find their mana reserves increased.

The full fury of the stars are unleashed by the master Astrologist, who may call down the meteor storm in a similar manner to the lesser meteor strike: first by drawing a zodiac circle under the open sky.

However, unlike the lesser spell, the meteor storm shall deal the full fury of the celestial bodies' wrath to all your personal enemies in the location - provided they are labouring under the energies of a negative zodiac sphere. The zodiac spheres will be consumed by the summoning and converted into raw destructive fury.

This ability allows you to unleash the powers of two signs at once upon your target. These effects will be of the ray type, and only astrological signs may be used, not planets.