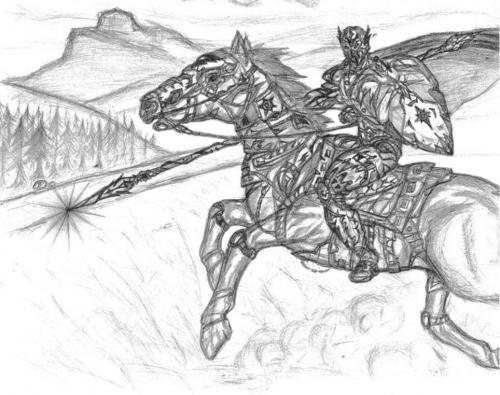 By training your beast for riding, you can mount and dismount the beast.

By training your beast to swim, you can ford across rivers and other watery areas upon your steed. As long as you remain on your steed, you will not be in danger of drowning.

You can train any beast to attack, and its damage is dependent on its level. Note that beasts will only attack upon command.

Gallop quickly in a direction upon a mounted steed.

If you have a beast out of a stable, you can whistle and call it to you.

By hardening the hide of your beast, it will absorb damage.

Trade your beast to another, transferring its loyalty. Make sure you get a good price!

You can train your beast to dive into the depths of the ocean.

You can dismiss your beast, sending it back to its stable. Your bond is so strong that the beast need not be in your presence in order to dismiss. You may also summon a beast from its stable, though this may take a little time before the beast can find you.

If you dismiss a beast with the 'feed' option, it will feed out of its feedbag while it is in the stable.

By speeding up different parts of a beast's metabolism, you can also speed up the regeneration of their health, mana, or ego.

This is an automatic ability for a beast trained to trot. You will be able to spur your beast into a trot, so that when you are mounted you can move further before worrying about undue haste.

You can increase the damage of battle beasts by increasing its aggressive nature.

Use your beast to jump over obstructions.

You can transform your beast to breathe different types of breath weapons, each with a different damage type.

This is a passive ability. So long as a beast has been trained to help you influence, you will automatically gain a bonus while using the influence type so long as your beast is at your side.

Your skills in riding mounted beasts have improved to the extent where you are capable of the following skills: Vaulting
Instead of mounting a beast trained in riding, you can vault onto it, cutting your balance time by two-thirds.
Getting
Your ease of being upon your steed is so great that you can easily scoop up items that lay on the ground while still mounted.

Whether your beast naturally has wings or specially grown with reagents, your beast can fly you into the wild blue yonder.

Your bond with your loyal beasts are so great that you can channel your own health, mana, or ego into your beasts. Note that this uses a beast action, as though you ordered them.

Your beast can burrow below the ground, if possible. BURROW BELOW will allow you to break through the surface or dig deeper down. You can dig upwards with BURROW ABOVE. To move horizontally, use BURROW <dir>.

If your beast has wings, you can train it to flap its wings to create a gust that can either blow a fog or cloud out of the room, or blow a player in a particular direction.

You can transform your beast to breathe a special type of breath weapon which will flood a room with a cloud that effects all enemies.

Every beast has channels of energy within, and you can train the beast to tap into its reserves and channel those energies into you.

Train your beast to climb trees.

Train your beast to use its mass to block exits.

You can train your beast to scale up the mountain heights.

By training your beast to blend in with the surroundings like a chameleon, you may order the beast to disappear from cursory sight at will.

Allows you to buck someone into an adjacent room, assuming they are not mounted, prone, or have defenses that prevent you from moving them.

Whip your beast into a fury and trample the ground. Any personal enemies who are prone in your location will be in danger of having their limbs crushed under your steed's deadly rampage. The number of limbs crushed is based partly on chance and partly on your steed's level. The amount of damage is based upon the level of your steed and number of limbs crushed. Further, the larger group of enemies that are trampled the fewer potential limbs will be crushed per individual (i.e., trampling 4-6 people will only potentially break 3 limbs per person, and over that the maximum that could be broken per person is 2 limbs.)

Every beast has channels of energy within, and you can train the beast to tap into its reserves and channel those energies into you to cure you of certain ailments.

If you have this skill, your beast will automatically attempt to protect you from attacks. This is only effective against denizens (i.e., not players).

Some beasts are intelligent enough that you can train them to cast spells.

You can master one beastmaster skill and be able to temporarily imbue it in one of your beasts. The skill will last one hour and you may imbue three times per month. Typing BEASTMASTER on its own will show you whether you can train a beast this month, or how long a beast has left before it will forget the Beastmaster skill.