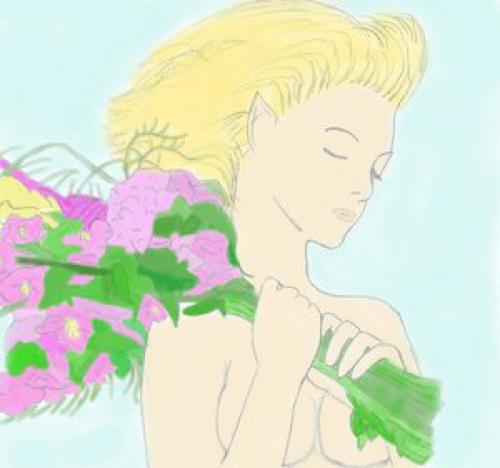 Walks as Whispers (by Joli)

Many farmers consider flax as nothing but a common weed. However, nutrition-conscious cooks know the oil of the seeds are quite beneficial. Alchemists also often will seek out this herb for their own purposes.

The yellow flowers of the arnica bush may be picked when they are buds. Notably, arnica may be chewed and applied to heal small breaks and fractures of the bone, including fractured wrists, broken noses, and cracked ribs.

While chefs often use this aromatic herb in cooking, it is the herbalist who knows that it is renowned for helping to clot bleeding wounds.

This hallucinogenic herb is not native to Lusternia; rather, its appearance coincided with the arrival of humans.

This colourful flowering plant is commonly used for ailments relating to disorders of the blood, including haemophilia, lethargy, relapsing, bleeding and cut arteries.

Galingale is a sedge that is rather common. The stems can be eaten and helps clear the mind of a variety of afflictions, including addictions, generosity and gluttony. It is also reputed to nullify the effects of lover's curse.

Sargassum is a common seaweed without medicinal benefits, though alchemists often find a use for it.

These tasty little mushrooms pack quite a punch, having the ability to counter a wide range of spiritual curses, including pacification, the aeon curse, unwanted peacefulness, and the dread powersink.

Desert sage is an extremely aromatic plant, though no medicinal use has yet been found for it. Alchemists, however, are known to use it.

Cooks and alchemists seek out this useful herb, though the herbalist relies on it for its qualities to treat diseases of the muscular system. It can be used to cure weakness and rigormortis.

The lush green leaves of the colewort looks similar to that of kale. Though herbalists do not find it a particularly useful herb, alchemists use for some of their preparations.

Though rosehips are beautiful little flowers, they do not offer any medicinal uses to speak of. Even so, alchemists will often ask for them.

This seaweed has amazing abilites to regenerate the nervous system. It can be used as a cure for clumsiness, dizziness, epilepsy, the vapors, and hemiplegy.

The leaves of a bog myrtle bush can cure ailments of the senses, including blindness, deafness, concussion, vertigo and sensitivity.

While not exactly considered a medicinal herb, the strong beans of the kafe bushes can be eaten to make one alert for when sleep is not desired.

Raw tea leaves are sought after by brewmeisters, who use them to create different types of teas which can be brewed into invigorating beverages.

While this is the only herb that thrives in the taint, it can be used to cure almost every type of known phobia, including agoraphobia, claustrophobia, hypochondria and vestiphobia. It is also used by alchemists in the creation of absynthe.

You can pack pipes with smokeable herbs such that the number of puffs will be doubled.

Juniper berries are not considered useful as a medicinal quality, though alchemists will often seek out herbalists to obtain them.

The flowers of the horehound plant are beautiful white creations of nature. They can also be used to counter certain magical afflictions, including recklessness, the healthleech, and dissonance.

Using your skilled eye, you may now discern the identity of the last person to harvest plants in your location.

This beautiful flowering plant is quite common and also quite useful in curing certain mental afflictions, including confusion, dementia, hallucinations, paranoia, and stupidity.

Though the calamus plant has gorgeous yellow flowers, it is the root that has the medicinal qualities that many herbalists seek. It helps cure glandular disorders, including overactive sweat glands that cause slickness.

This type of fungus only grows in the Mountains of Madness, and has no beneficial properties whatsoever. However, earwort is the home of tiny red snails, sometimes called cochleas or cockles, which when eaten travel up the eustachian tubes and wrap around the inner ear, telepathically passing sounds they hear to the deaf.

This beautiful, silvery plant has many magical properties. It can be smoked to create an aura that rebounds iron or steel, or eaten to grant the sixth sense.

Coltsfoot is a fairly common herb that is generally smoked for its medicinal properties, which clear the mind of many afflictions, including impatience, loneliness, shyness, anorexia, and masochism.

This magical, flowering lily can only be found in the legendary Great Starry Sea. Eating is like having just awoken from a refreshing, full night of sleep. You will not be able to sleep after such an experience.

You may pack battle figurines with up to 50 sparkleberry. During a battle, they will some times eat this herb to heal themselves.

By carefully blending several dried herbs, you can create a smokeable curative that soothes the spirit.

Mistletoe is widely sought after by druids for their mystic qualities. Otherwise, there is very little demand for mistletoe, other than the occasional request from an alchemist. Note it is the only herb that actually grows in trees.

The sparkleberry bush only grow in the wild energies of the astral plane. Indeed, the berries are seeped in power such that eating them will regenerate health, mana and ego.

You can create sparkleberry jelly from 50 sparkleberries. This jelly can be used in a construct or colossus to enable the operator to heal the construct.

As a master herbalist, your affinity to herbs is great indeed. So much, in fact, that you will be able to use herbs personally faster than others. Herblore also boosts the effects of the sparkleberry herb.